On January 4, 1962, the Board of Directors of North Suburban Synagogue Beth El established the Kol Ami Collection. It was the dream of Maurice and Badona Spertus who donated many works that form the core of the collection. On March 8, 2002, the museum was dedicated by Ellen and Arnold Rissman as the Arnold Rissman Family Kol Ami Museum, in honor of their children, Lauren, Aron and Jacob, “with hope for the future.”

Today, the Rissman Kol Ami Collection includes the many art works and ritual objects displayed throughout the building and used by the congregation. Its mission is “to accept, collect and preserve objects of Jewish ceremonial art, articles of folklore, manuscripts and documents of historical value, in order to illustrate the biography and demography of the Jewish people from a spiritual and artistic point of view, reflecting the religious and cultural mode of life in the past and present.”

The diverse collection encompasses works from the 18th century to modern times that come from many countries around the world. The collection consists of paintings, sculptures, prints, rare books and Judaic ritual objects such as menorahs, spice boxes, crowns, rimonim (Torah finials), pointers, breast plates and a unique tik (Torah case).

The gallery area features objects from the collection as well as visiting exhibits throughout the year.

Visit the Rissman Kol Ami Collection exhibit space and see some of its treasures. 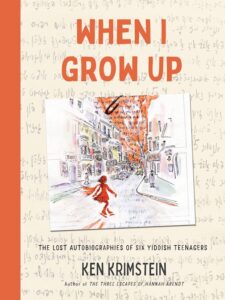 When I Grow Up: The Lost Autobiographies of Six Yiddish Teenagers
Ken Krimstein
December 2022 – February 2023

Original artwork from the new graphic nonfiction book, based on never-before-published autobiographies of six eastern European Jewish teens in the 1930’s that were discovered in a Lithuanian church cellar in 2017, is on display through February.

Ken Krimstein is a cartoonist, educator, and author. Krimstein teaches at DePaul University and the School of the Art Institute of Chicago. When I Grow Up was an NPR Best Book of the Year, a Washington Post Top Ten Graphic Novel of 2021, and a Chicago Tribune Fall “Best Read.”

Click here for our Guidelines for Submitting an Art Exhibit Proposal. 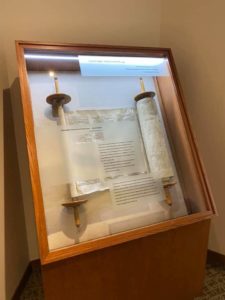 Beth El’s Czech Sefer Torah Scroll No. 44 is now beautifully displayed in a new case in the Choos Alcove. This Torah was once cherished by the Jews of Prostejov (“Prossnitz” in German), located in the Czech Republic. The Prostejov synagogue and yeshiva sustained a vital Jewish community until the Nazis invaded in March 1939.  In July the synagogue was forced closed.  This scroll, hand-written in the 1800s, was confiscated by the Nazis and warehoused with 1,563 Sifrei Torah from other devastated Jewish communities in a ruined synagogue in Michle, outside Prague. In 1964 the scroll was rescued from oblivion and traveled to the Westminster Synagogue in London as part of the Czech Memorial Scrolls Trust. It was brought from London to North Suburban Synagogue Beth El in 1980 by congregants Judith and Roger Leff.

To Bear Silent Witness to our Past. To Honor the Memory of the Prostejov Community.  To Remember the Shoah. The Torah is rolled to Deuteronomy 25:17-19:
Remember what Amalek did to you . . . do not forget.  These cautionary words from Parsha Ki-Teze in Devarim recall the biblical nation of Amalek, which attacked the Israelites in the desert.  We read these verses on Shabbat Zachor, the Shabbat before Purim, in connection with the megillah story of the oppressor Haman. The Nazis were also regarded as evil Amalekites.  Abraham Lewin, a member of the clandestine Oneg Shabbat, a group that chronicled life in the Warsaw ghetto, wrote in his diary on June 6, 1942: We want our sufferings  to be described for future generations.  We meet every Shabbas to tell each other what the old-new Amalekites are doing to us, the Jews.  These stories always weigh on me and my head starts to ache.