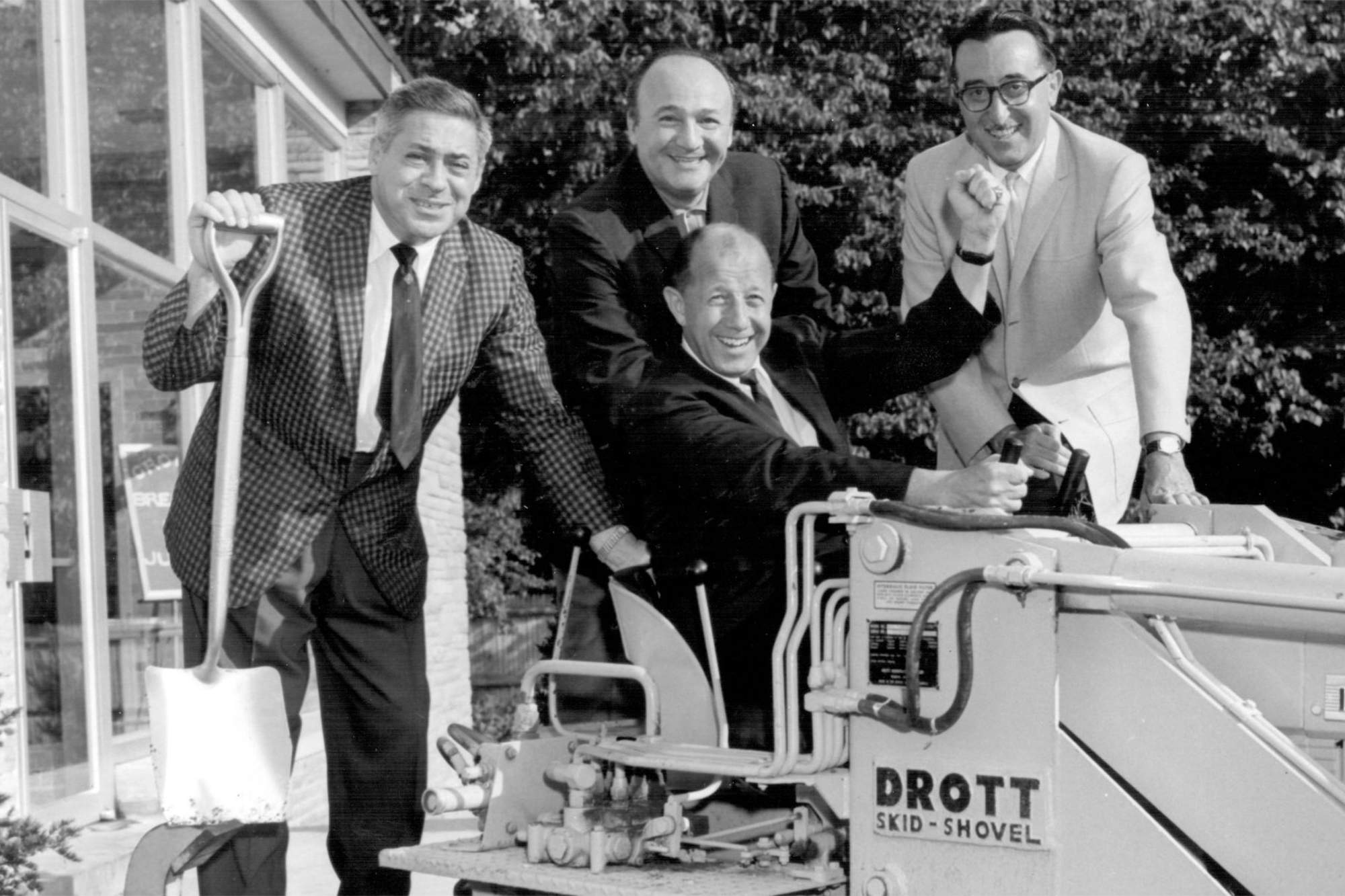 You are here: Home » About » The Beth El Story

As early as 1944, perhaps even earlier, attempts had been made by traditionally minded and more observant residents of Chicago’s North Shore area to organize regular religious services and to develop some type of formal religious organization.  Benjamin and Gertrude Harris were the leaders of this group of pioneers.  The Harrises maintained a Torah scroll in their house and regularly opened their home in Glencoe for traditional religious services.  On Sunday morning, March 19, 1944, and again on the following Sunday, Ben Harris hosted a small group of individuals “to discuss the organization of a Conservative Congregation on the North Shore.”  Those initial meetings planted the seed which eventually would grow into North Suburban Synagogue Beth El.

By 1946 approximately two dozen families were part of this group.  That year, at a meeting held in the Glencoe home of Arnold and Stella Natenberg, they decided  to organize on a formal basis and the initial officers of the new congregation were elected: Arnold Natenberg, president; Oscar Pinsof, vice-president; Joseph Gray, secretary; and Seymour Graham, treasurer.  On July 18, 1947 Articles of Incorporation were issued by the State of Illinois for North Suburban Synagogue Beth El.

The Sisterhood was organized in October, 1947 at the Evanston home of Sarah and Isadore Braun.  Stella Natenberg was elected its first president.  Soon the Men’s Club was started with Harold Heisler as its president.  Both of these organizations would be vital affiliates of the synagogue throughout the years.  Also that fall a Sunday School, Hebrew School and Gan (nursery school) were established, with classes held at the Winnetka Women’s Club under the supervision of Beth El’s first Director of Schools, Meyer Shisler.  This set the precedent for the congregation’s strong commitment to Jewish education.

While the first attempts to obtain a permanent home were unsuccessful, during the summer of 1948 the congregation purchased the seven-acre estate at 1201 South Sheridan Road in Highland Park.  (The address became 1175 Sheridan Road in 1951 when Highland Park changed its street numbering system.)  The new synagogue had been a lavish twenty room residence designed by the renowned architect Ernest Mayo, built in 1911 for Edward Valentine Price who had called it “Bonita Vista” because of its stunning views overlooking Lake Michigan.  It quickly became a second home to Beth El’s families.  And Beth El began to grow.

In the fall of 1948 the congregation engaged the services of its first permanent rabbi, Maurice I. Kliers, of Temple Sholom in Philadelphia.  That was a difficult yet exciting time for the Jewish people everywhere as they struggled to cope with the consequences of the Holocaust in Europe and to build the new State of Israel.  The founders of Beth El also faced many challenges, frequently financial, that would continue for several years until a more solid fiscal foundation was established.  But it was also a time to dream of the future and to build for the sake of their children and the community.  Harold Blumberg, who eventually would become known as “Mr. Beth El,” was one of the most active of all of the leaders of the synagogue in its first years of struggle and he would continue to be a key lay leader of the congregation throughout the 1950s and well into the following decades as well.

In the summer of 1950, Rabbi Kliers left the congregation to serve South Side Hebrew Congregation in Chicago.  The following January, Rabbi Philip L. Lipis of Oakland, California, became Beth El’s second spiritual leader.  He soon infused the entire congregation, then numbering 280 families, with his spirit and energy.  With his encouragement, the board of directors adopted a plan to meet the demands of a growing congregation and to construct a school building, community center and sanctuary.  With more than 400 youngsters in the school programs, the first priority was the school and by 1953 a new school building had been constructed and was in use.  The engraved marble slab, imported from Israel for the building dedication, is still visible in the school hallway.

Construction of a “community center” began in 1955; it would eventually be called the Blumberg Auditorium.  In the fall of 1957 for the first time High Holiday services were held in Beth El’s own home.  Five years later, the new sanctuary, designed as a “jeweled crown” by noted architect Percival Goodman and later dedicated as the Field Family Sanctuary, had been constructed.  During the next few years, the beauty of the sanctuary would be enhanced with ark doors, a menorah and other accoutrements designed by Ludwig Wolpert.

Rabbi Lipis by then served a congregation that had grown to almost 800 families.  He had reinforced the commitment of the synagogue to strong educational programs by bringing Dr. Louis Katzoff, a renowned educator, to Beth El as educational director in 1958 and by providing critical support for the development of the Solomon Schechter Day School and for Camp Ramah.  Feeling he had achieved his goal of building a community based on traditional Judaism within the context of modern Americanism, he stepped down as spiritual leader of the congregation in the summer of 1969.

In August, 1969 Samuel H. Dresner of Springfield, Massachusetts, an eloquent speaker and noted scholar, became Beth El’s new rabbi.  He soon presented his agenda of strength in education, maintenance of high standards for Jewish living, and institutional development.  Hundreds were attracted to weekly Shabbat services to hear him preach.  Rabbi Dresner greatly influenced the congregation in a renewed commitment to Jewish thought and practice and was instrumental in increasing the role of women in the synagogue’s ritual.  He brought numerous notable figures to the synagogue, including Elie Weisel, to teach. Rabbi Dresner departed Beth El following a contested election of officers and directors in 1977 and became the founding rabbi of Moriah Congregation in Deerfield.  The following year Rabbi William H. Lebeau of Port Jefferson, New York joined Beth El as its new spiritual leader.

Rabbi Lebeau soon shared with the congregation his vision of enhancing the synagogue’s educational programs and facilities, including an enriched Youth Community.  Within a few short years the congregation commenced a construction project, completed in 1988, which included an expansion of the school building, a new administrative wing, a multi-purpose activity center, and the transformation of the first floor of the mansion building into a Cultural and Learning Center.  The congregation also created an educational endowment to perpetuate the programing to be undertaken in the new facilities.  Rabbi Lebeau also introduced several innovative educational programs, including a joint parent/child class for pre-bar/bat mitzvah students. But after more than a decade of devoted service at Beth El, Rabbi Lebeau was called to serve as Vice-Chancellor of the Jewish Theological Seminary in New York and dean of its Rabbinical School.

In August of 1988, Vernon H. Kurtz of Congregation Rodfei Zedek in Chicago became Beth El’s senior rabbi.  Over the course of the ensuing years, he developed a strong youth program, actively and personally promoted adult education, and constantly served as an advocate for Israel.  He encouraged the establishment of Beth El’s own Hebrew High School program, implemented progressive changes in religious services and ritual based upon serious attention to Jewish law, and oversaw the very successful “Guaranteeing Our Future” campaign in 1999 which significantly enhanced the congregation’s endowments.  Rabbi Kurtz sought numerous opportunities to educate the congregation and also became adjunct Professor of Rabbinics at the Spertus Institute for Jewish Learning and Leadership.  In 2004, Rabbi Kurtz was joined by Rabbi Michael Schwab to assist in providing spiritual leadership to the congregation.  Rabbi Kurtz served in the highest leadership roles in numerous local, national and international organizations, which redounded to the benefit of the congregation.  He authored Encountering Torah: Reflections on the Weekly Portion and numerous other publications and articles.  In June, 2019, Rabbi Kurtz retired from the pulpit and moved to Israel.  Rabbi Schwab was selected to become Beth El’s sixth senior rabbi and Alex Freedman joined Beth El as Associate Rabbi.

Along with its tradition of strong and capable rabbinic leadership, Beth El consistently sought out leading cantors for inclusion in its clergy.  Jordan H. Cohen, son of the renowned Cantor Tevele Cohen of Chicago, joined Beth El in 1953.  He soon became a much beloved member of the community and would serve as Beth El’s cantor for the next sixteen years until his untimely passing at the young age of 42.  Reuven Frankel of Congregation Shaarey Zedek in Southfield, Michigan became the synagogue’s cantor in 1970.  After nine years of providing beautiful music as well as friendship, he obtained rabbinic ordination and became the rabbi of Congregation B’nai Tikvah in Deerfield.  Henry Rosenblum of Congregation Oheb Shalom in South Orange, New Jersey, joined Beth El as its hazzan in 1987.  He remained at the synagogue until 1998 when he moved to New York to become dean of the H. L. Miller Cantorial School at the Jewish Theological Seminary.  Hazzan Larry Goller joined Beth El from Congregation B’nai Israel in Millburn, New Jersey in 1998 and served as an important member of the synagogue’s clergy for seventeen years.  In 2015, Hazzan Benjamin A. Tisser from B’nai Torah Congregation in Boca Raton, Florida joined the Beth El family. Jacob Sandler became the synagogue’s Hazzan in 2021. And since 1981, William Weisel of Jerusalem, Israel, has served as the hazzan at the High Holiday family services held at the Highland Park High School.

After decades of leadership by distinguished clergy and through the efforts of  committed lay leaders, Beth El has achieved a reputation as a warm and welcoming congregation recognized for innovative Jewish education, traditional religious observance and a strong attachment to Israel and the Jewish people worldwide.  It has grown to become one of the largest and most respected and dynamic Conservative congregations in the country.  The dream of its founders, to build a synagogue which would serve their children and their children’s children, has become a reality.  Currently led by Rabbis Schwab and Freedman, Hazzan Sandler, Cohen Religious School Director Anna Besser, Director of Congregational Learning Ali Drumm, Steinberg Pre-School Director Kory Goldenberg, Executive Director Jeff Baden, Ritual Director Hazzan Barbara Barnett and the other devoted members of Beth El’s professional staff, the congregation is well poised to extend its legacy into the future.  New dreams are being dreamed, new challenges are being faced, and the story of Beth El continues.