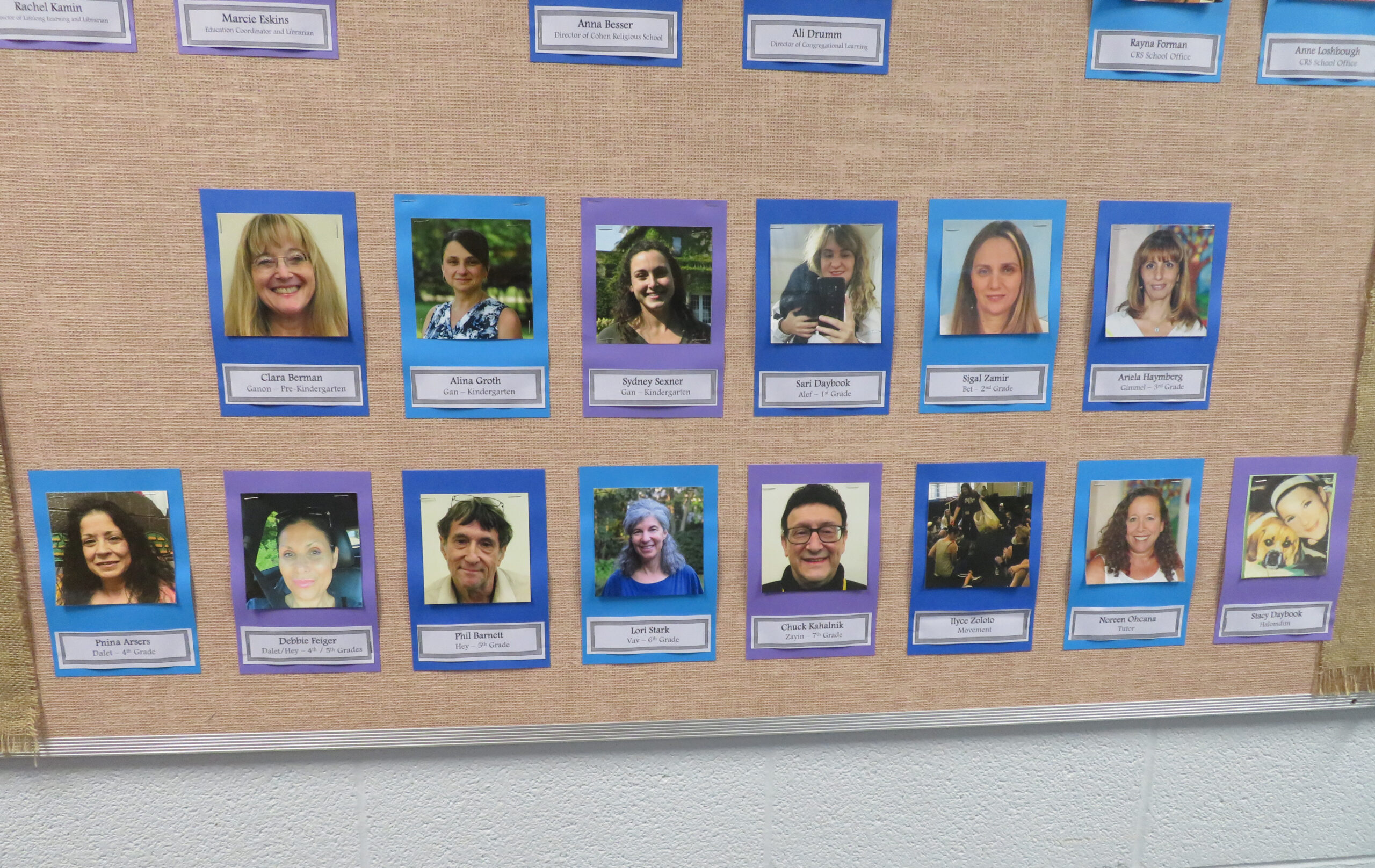 Pnina Arsers
Pnina Arsers has been a teacher at Beth-El North Suburban Synagogue for many years. Outside of her work at Beth-El, Pnina is on the faculty of the Rochelle Zell Jewish High School and is pursuing a graduate degree from Northeastern Illinois University.

Hazzan Barbara Barnett
Hazzan Barnett has been a professional Jewish educator for over 20 years. A member of the Cantors Assembly, she received her commission as Hazzan-Minister from the Cantors Assembly in 2018. She holds a B.S. in Biology and an M.A. in Political Science, and is an award-winning novelist, writer, and accomplished public speaker. She has published works on a wide variety of topics, from pop culture to spirituality.

Phillip Barnett
Phillip Barnett is a former I.T. Manager and Project Manager who has been teaching and tutoring Hebrew for several years. He also has played jazz piano, folk guitar and klezmer clarinet (not at the same time – that would look silly and probably hurt his back).

After graduating from Sokol Hebrew High School, Ms. Berman’s studies continued through degrees from the University of Chicago in Political Science and Sherwood Music School and Northwestern in music. After receiving her Master of Music degree in Music Education as well as certifications in Kodaly Method, The Orff Schulwerk and Suzuki Piano, Clara added State teaching certification as well certificates in Jewish Learning and Chaplaincy to work as a cantorial soloist.

Sari Daybook
Sari has taught Sunday School for ten years at Congregation Bene Shalom Temple for the Deaf and Hearing. She currently performs in their sign language choir every Friday night for services and works full-time for New Trier High School as an Instructional Assistant for the Special Education Transition Program. When not working, Sari enjoys cooking, playing with her cats and spending time with her family!

Stacy Daybook
Stacy has a BA in Elementary/Special Education from Northeastern Illinois University, CFJE/Spertus Education Fellowship Seminar, is a member of Israel Curriculum Planning Committee, and a presenter at CAJE Conferences. She currently coordinates the Enrichment Room services for students and teachers at CRS.

Debbie Feiger
Debbie previously taught at Congregation Hakafa in Glencoe  and Congregation Beth Am in Buffalo Grove.  Debbie lived and worked in Israel on the Hachshara program and studied Judaic studies at Orot in Elkanah.

Alina emigrated from the Former Soviet Union with her family in 1979. She attended high school at Ida Crown Jewish Academy in Chicago. Then went on to receive a Bachelor of Science Degree in Social Welfare from The University of Wisconsin-Madison and a Master’s Degree in Social Work, Social Policy, and Social Administration from the University of Chicago. This is Alina’s 19th year teaching Religious School and her first year teaching here at CRS. Teaching is one of her absolute passions and she is excited to join the CRS community.

Ariela Haymberg
Ariela Haymberg was born and raised in Israel, but has been living in Chicago for over 15 years.  Ariela also taught at West Suburban Temple Har-Zion.

Randi Heichman
Randi is happy to be teaching at Beth El synagogue where she attended Hebrew school and had her Bat Mitzvah many years ago.  She received a Bachelor’s degree in Elementary Education at the University of Illinois Champaign-Urbana where she also studied conversational Hebrew.  After graduation she taught kindergarten at Solomon Schechter and more recently taught preschool at the JCC.

Chuck Kahalnik
Chuck has a BA in Political Science & Education from Northeastern Illinois University, and holds a State of Illinois Teacher’s Certificate. He has been serving the Jewish community of Chicago for over 36 years, primarily in formal and informal Jewish education. Chuck has taught at Beth El for the past 13 years, and was the Executive Director of the synagogue from 2007-2016.

Sharon Mozes
Sharon was born and raised in the Chicago suburbs to two Israeli parents. She grew up speaking Hebrew and went on to study abroad at Hebrew University in Jerusalem, Israel. She graduated from Bradley University and has experience working with kids with special needs and teaching Sunday school. She has been living in Jerusalem for the last 18 months and moved back to the Chicagoland area in October 2021.

Noreen Ohcana
Noreen Ohcana has taught mathematics at the Sager Solomon Schechter Middle School for the last 24+ years. She is an active member of North Suburban Synagogue Beth El. Noreen believes in building a Jewish community in the classroom where students feel as though they are part of that community as well as a contributing member.

Rabbi Michael Schwab
Rabbi Michael Schwab is completing his 15th year at NSS Beth El. He received his BA from Rutgers University, where he majored in History and Jewish Studies, and he received his ordination from the Jewish Theological Seminary of America (JTS) in May, 2004. In addition, Rabbi Schwab received an MA in Jewish Education from the William Davidson Graduate School of Education.

Lori Stark
Lori has worked with learners of all ages ranging from kindergarten to adults in day school, religious school and camp settings. She was the director of Ramah Day Camp from 2000 to 2019. Lori is looking forward to a fun-filled year of inspiring young minds to lead meaningful, knowledge-based, Jewish lives.

Sigal Zamir
Sigal has dedicated her career to Judaic and Hebrew language education to children in the Chicago area. She was born and raised in Ramat Gan Israel, and joined the mandatory military service I.D.R. at the age of 18. A graduate of Northeastern Illinois University with a B.A. in Education, Sigal holds a teaching license from ISBE, certified in English and Hebrew.

Rachel Kamin
Rachel Kamin, the Director of the Beth El’s Joseph and Mae Gray Cultural and Learning Center, has also worked as the Preschool Liaison Librarian at the Des Plaines Public Library and as the Director of the Libraries & Media Center at Temple Israel in West Bloomfield, Michigan. She holds a B.A. in History from Grinnell College and a Master’s degree in Library and Information Science from Michigan.

Marcie Eskin
Marcie has been the assistant to the CLC Director since January 2010. She received her Bachelor of Arts degree in Government from Cornell and her Master of Library and Information Science degree from Dominican University. In addition to her work at NSS Beth El, she is the librarian at Beth Hillel Congregation Bnai Emunah in Wilmette.